The Most Ethical Surrogacy Reform Passes in NY, Finally!

Albany lawmakers pass landmark surrogacy reform, after years of deliberation and negotiations. In a marathon budget session, New York lawmakers passed on April 2, 2020, The Child Parent Security Act (CPSA), the most protective and forward-thinking surrogacy legislation in the country. Only Michigan and Louisiana continue to ban gestational surrogacy for LGBT individuals and couples, Michigan banning gestational surrogacy for all Michiganders. Men Having Babies has advocated for this reform over the years, and MHB staff and members have been extensively active in lobbying for the CPSA. MHB now offers answers to Frequently Asked Questions (FAQs) about the bill, and how it may impact our members' surrogacy journey.

Our former board chair, Anthony M. Brown, has been closely monitoring the bill's development. "While legal surrogacy in New York seemed doomed after it failed to be brought to the floor for a vote in the Assembly after passage in the Senate and vocal support of the Governor, this year the Child Parent Security Act was tied to the budget," he explains. "This move forced lawmakers to affirmatively support or oppose the Bill, something that they had been reticent to do in June of 2019."

The reality of legal surrogacy in New York is the product of a massive effort on the part of many organizations and individuals. From our organization, Men Having Babies, to The Women’s Bar of New York, several organizations have stepped up to the plate to make legal surrogacy in New York a reality.  Ron Poole-Dayan, Executive Director of Men Having Babies, said, “The CPSA is the most comprehensive, thoughtful and ethical surrogacy legislation ever drafted. It is particularly important now in the midst of a health crisis, to pass this legislation that provides New Yorkers an ethical and more practical path to realizing their parenthood dreams. This is landmark legislation and we are proud of our lawmakers for taking this important step to help LGBT families prosper.”

MHB's executive director, coalition partners, and several of our parents stood by Governor Andrew Cuomo as he launched a campaign to legalize surrogacy in NY.

“It’s an amazing day and it’s nice to be able to celebrate in these dark times. The bill only passed when the issue grew into a moment and everyone played an important role,” stated Denise Seidleman, the New York attorney who was instrumental in drafting the legislation.

“We are overjoyed for New York families, as they finally are able to access gestational surrogacy if they need it to build their family.  This has been a marathon, with many teammates along the way.  This kind of win takes people raising their voice and advocating – we thank everyone who did just that.  A huge thanks to RESOLVE advocate Risa Levine, and the Protecting Modern Families Coalition that got this over the finish line. We are honored to work alongside an incredible coalition,” said Barb Collura, CEO and President of RESOLVE, The National Fertility Association.

In a detailed post on his blog "Time For Families", Anthony describes how this legislation is unique. "First, it contains a Surrogates Bill of Rights, which is the first of its kind in the country.  It provides specifically for independent counsel, health and welfare decision making authority during the pregnancy and full medical and legal informed consent of all New York women acting as surrogate mothers for intended parents. It also provides for psychological counseling, life insurance and the ability of the surrogate to terminate the agreement prior to embryo transfer."

"The Child Parent Security Act also creates two formal, but voluntary, registries, one for egg donors and the other for surrogate mothers, which tracks information on the number of times someone has served as a donor or surrogate, their health information and any other information that the Health Commissioner deems appropriate," explains Anthony. "The legislation also allows for consultation with The American Society of Reproductive Medicine (ASRM) to develop the best medical screening guidelines for potential surrogates." 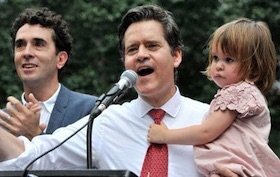 Over the years this legislation has beed deliberated, MHB had the opportunity to share its Ethical Framework with Senator Brad Hoylman and others who worked on this legislation. "We're thrilled to see that the Child Parent Security Act is in very close alignments with our ethical position," stated Poole-Dayan. "The Surrogates Bill of Rights goes a long way to provide the protections and professional protocols for an ethical journey, codifying the best practices of the most reputable surrogacy providers."

"The Surrogates Bill of Rights is a huge step toward ensuring that the process is balanced and that the woman acting as a surrogate mother has agency and support throughout the process," said Brown. "The law also provides for the security of parentage, which assures that all parties are working toward a single goal of creating a family for the intended parent or parents."

Consistent with the MHB framework, this bill is the first in the country (possibly worldwide) to include explicit language on why surrogates and donors should be compensated, and for what: "Compensation may be paid to a donor or person acting as surrogate based on medical risks, physical discomfort, inconvenience and the responsibilities they are undertaking in connection with their participation in the assisted reproduction. Under no circumstances may compensation be paid to purchase gametes or embryos or for the release of a parental interest in a child."

In another example, the legislation explicitly sets $750,000 as the amount for the surrogate's mandated life insurance benefits. "This is in line with MHB's call to go above the current prevailing sum of $250,000 across the United States," said Lisa Schuster, MHB's Director of the Gay Parenting Assistance Program.

You May Also Enjoy

As the UK Reconsiders Surrogacy, a Call to Learn From Accepting and Inclusive Regulatory Frameworks in the USA

Fertility Equality Movement Gets Boost From The New York Times