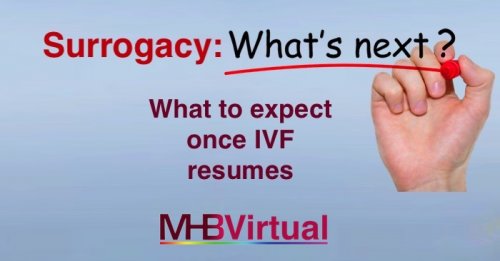 Once we return to a sense on normal, IVF clinics will begin to reopen to their full capabilities. Join us to go over what to expect when that happens, will there be delays, what will be readily available and what will not and much more. We will also have an expert Q&A Panel of leading industry professionals to help shed light on this process.

The online event will include several guests experts, and moderated by the MHB team. It will include ample opportunities to ask questions in real time. It is offered live twice to accommodate our members worldwide:

Attendance of this webinar is free of charge. Please register at this link (or the button above).

The webinar recording is now available to members only. To learn more about becoming a member, click here.

Dr. Doyle is the founder of CT Fertility where he served as medical director for 25 years. During that time he was responsible for the successful surrogacy journeys of hundreds of gay men both in the US and abroad, and in his career helped in the creation of over 7,000 babies. He was an early advocate for safe and ethical surrogacy treatment and a strong proponent of non-anonymous egg donation. He also led one of the first and largest frozen donor egg banks in the US. After retiring from clinical practice in 2017, Dr. Doyle now devotes some of his time to several non-profits which are focused on educational access and community development, and he currently plays lead roles in both philanthropic and VC groups which invest in and assist social entrepreneurs around the world. He is thrilled to join the Men Having Babies board and hopes to focus on both development efforts and advocacy initiatives aimed at legalizing surrogacy anywhere where it currently faces opposition.

In clinical practice for over twenty years, Dr. Guy Ringler has developed a large international referral practice due to his excellent patient rapport and expertise in IVF, surrogacy, and gay family building at California Fertility Partners. As one of the world’s first fertility doctors to help gay men become fathers through egg donation and surrogacy, Dr. Ringler has been recognized by the American Fertility Association (AFA) with an Achievement Award. He regularly lends his voice to the public conversation about gay family-building as a spokesperson for GLAAD and a contributor to the Huffington Post. Dr. Ringler has worked closely with the AFA to increase public awareness of fertility options for people with HIV, and he has helped many HIV-positive people have children through assisted reproduction. Dr. Ringler is on the advisory board of Men Having Babies and lives in Los Angeles with his husband, Mark Rios.

Angeline N. Beltsos, MD is the CEO and Chief Medical Officer of Vios Fertility Institute. She is double board certified in Obstetrics and Gynecology and in Reproductive Endocrinology and Infertility (REI). Dr. Beltsos completed medical school at Michigan State University. Shen then went on to do her residency in Obstetrics and Gynecology at Loyola University in 1995 followed by a fellowship in REI at Washington University in St. Louis, Missouri, completed in 1997. Dr. Beltsos is also part of the Clinical Research team at Vios and participates in a number of research projects and scientific publications. She has received numerous awards in teaching and has been honored as “Top Doctor” from Castle Connelly for several years. She is a popular speaker, both nationally and internationally, and a frequent media resource on the topic of infertility. Dr. Beltsos is the executive chairperson for the Midwest Reproductive Symposium International, an international conference of fertility experts.

Daniel A. Skora, M.D., is a physician at Fertility Specialists of Texas, and serves as medical director of third party and LGBTQ+ services. A proud member of the LGBTQ community, Dr. Skora is board certified in both Obstetrics and Gynecology, and Reproductive Endocrinology and Infertility. Dr. Skora graduated cum laude with his Bachelor of Arts degree in psychology with a certificate in neuroscience from Princeton University. After working as a research fellow at the National Institutes of Health, Dr. Skora attended the University of Minnesota medical school and received his medical degree. Dr. Skora completed his residency at George Washington University Hospital and his fellowship at The Larner College of Medicine at the University of Vermont. Dr. Skora is passionate about all aspects of infertility. He is dedicated to addressing the unique needs of the whole patient and uses his education and experience in psychology to help each one overcome the emotional challenges of trying to conceive. Dr. Skora is a member of the American College of Obstetrics and Gynecology.

Back to Upcoming Events