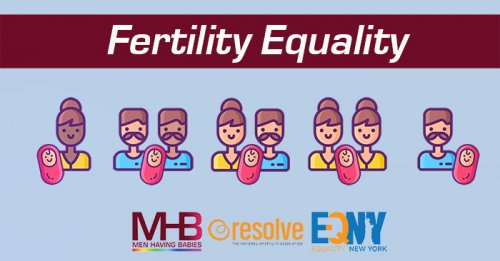 MHB is partnering with Resolve: The National Infertility Association and Equality NY to set an ambitious agenda for removing financial obstacles for surrogacy by promoting an LGBTQ-equitable definition of "infertility," working to expand surrogacy applicable insurance for IVF, egg donation, maternity and delivery; and encouraging initiatives that can make becoming a parent through surrogacy more widely affordable in the realms of taxation, employer benefits, affordable financing, and charitable donations. More than 150 community advocates, professionals, prospective parents and allies joined on February 5, 2021, to hear about promising developments in these areas, and join a discussion about effective strategies and opportunities to take part in national and regional initiatives. The virtual forum was hosted in cooperation with EMD Serono utilizing the specialized REMO platform.

MHB's primary advocacy goal is to broaden access to affordable parenting options for gay men. Major progress has been made in removing legal barriers for surrogacy in the USA, but we'd like to also raise awareness that financial barriers prevent the majority of prospective parents from taking advantage of these legal achievements. The good news is that now more than ever, much can be done to lower these barriers.

The purpose of this forum was to set an agenda and encourage advocacy in areas where the most progress can be made, including:

For a limited time, you may watch the event recordings below:

Dr. Silvia Schneider Fox is a clinical psychologist and founder of Fertility Resilience, a reproductive psychology practice with offices in the Chicago area. A specialist in the field of reproductive medicine, adoption and family building since 1992, Dr. Fox counsels individuals and couples in various areas of family building, including ART, collaborative reproduction, pregnancy loss, and parenting after infertility. She conducts third party evaluations, facilitates mind/body programs; researches, writes and presents on a variety of topics related to family-building. Dr. Fox has had her own experience with infertility. After undergoing extensive infertility treatment, she and her husband became parents through IVF. Nowadays, she combines her personal, research and clinical experience into one voice, on her Fertility Resilience blog.

Virginia Hart has been an insurance broker for the past 25 years, the last 17 years specializing in insurance for all aspects of assisted reproduction. As founder and CEO of ART Risk Financial and Insurance Solutions, Inc. she remains current on insurance issues pertinent to the field and works with her clients to find the best solution, whether it be through commercial insurance, specialty products, or financial case management. Licensed in all 50 states, this allows her to work with clients regardless of location in the U.S. as well as internationally. With her extensive breadth of knowledge and expertise in the Assisted Reproductive Technology insurance industry, Virginia is often requested as a guest lecturer at numerous conferences and recently published an article in the American Bar Association Section of Family Law "Family Advocate" magazine. Focusing on offering clients the knowledge to help them better understand their liability exposures and the best available financial risk management solutions is always one of Ms. Hart's highest priorities.

Steven H. Snyder, Esq., is the founding and principal partner of Steven H. Snyder & Associates, and he is the Director IARC Surrogacy a full-service surrogacy agency, both located in the U.S. in Minnesota. Mr. Snyder is an active leader in numerous professional organizations, including RESOLVE, the American Fertility Association, the American Society of Reproductive Medicine, and the American Bar Association Assisted Reproductive Technology Committee. Mr. Snyder is the author of numerous articles and continuing legal education materials. He is also a frequent national and international lecturer and continuing legal education presenter in the area of assisted reproductive technology law. Mr. Snyder regularly contributes to various media interviews and publications as a legal expert in assisted reproduction and third-party reproduction legal issues.

In clinical practice for over twenty years, Dr. Guy Ringler has developed a large international referral practice due to his excellent patient rapport and expertise in IVF, surrogacy, and gay family building at California Fertility Partners. As one of the world’s first fertility doctors to help gay men become fathers through egg donation and surrogacy, Dr. Ringler has been recognized by the American Fertility Association (AFA) with an Achievement Award. He regularly lends his voice to the public conversation about gay family-building as a spokesperson for GLAAD and a contributor to the Huffington Post. Dr. Ringler has worked closely with the AFA to increase public awareness of fertility options for people with HIV, and he has helped many HIV-positive people have children through assisted reproduction. Dr. Ringler is on the advisory board of Men Having Babies and lives in Los Angeles with his husband, Mark Rios.

Senator Brad Hoylman, the chair of the Senate Judiciary Committee, champions a wide range of issues, such as housing, transportation, public education, environment and seniors. He led the passage of the child Parent Security Act, the nation’s most comprehensive and ethical legal surrogacy framework. In addition he has passed over fifty bills in the Senate, including the Child Victims Act, which enabled adult survivors of child sexual abuse to revive legal claims against their abusers; GENDA, which extended human rights protections to transgender New Yorkers; and banning so-called “conversion therapy.” Brad is a longtime grassroots activist, serving previously as a Democratic District Leader and as the president of the Gay and Lesbian Independent Democrats. He has deep roots in Manhattan but was raised in rural West Virginia. Brad graduated from Oxford University, where he was a Rhodes scholar, and Harvard Law School. Senator Hoylman and his husband David Sigal, a filmmaker, are the parents of two young daughters, Silvia and Lucy.

Dr. Daneshmand is specialty board certified in Obstetrics and Gynecology and sub-specialty board certified in Reproductive Endocrinology. He serves on the board of several surrogacy advocacy groups. He has collaborated to develop in vitro fertilization (IVF) protocols to improve pregnancy rates, including PTEC (post-thaw extended culture), which is one of the most successful IVF regimens currently available. These groundbreaking findings were published in the internationally respected medical journal, Fertility and Sterility, where Dr. Daneshmand also served as a reviewer. As a leading physician in fertility care at San Diego Fertility Center, intended parents have travelled from more than 40 countries in 2019 alone to seek his help in their journey to parenthood.  He was the Principal Investigator in the Multi-Center Global research trial of non-invasive PGT-A, the latest technique for assessing embryonic genetic health without the need for embryo biopsy.

Kim Kaplan has served as Deputy Director at the Hebrew Free Loan Society (HFLS) since 2014. HFLS fosters financial stability and opportunity among lower-income New Yorkers by providing access to safe, affordable credit in the form of interest-free loans. Kim manages HFLS lending, develops new loan programs and partnerships, and plays a leading role across the organization’s operations. Prior to joining HFLS, Kim held positions in fundraising, grant-making, communications, and administration at nonprofit institutions including The Jewish Theological Seminary, the Conference on Jewish Material Claims Against Germany, and Hebrew Union College-Jewish Institute of Religion. Kim earned an MPA in Nonprofit Management and an MA in Judaic Studies from New York University and a BA in Jewish, Islamic and Near Eastern Studies from Washington University in St. Louis.

Risa A. Levine is a leader in the effort to secure insurance coverage for infertility treatment on the State and Federal level for over 15 years. She was instrumental in securing legislation in New York to cover in vitro fertilization treatment for large group insurance plans and legalizing compensated gestational surrogacy.  She served on the Board of Directors of RESOLVE: The National Infertility Association from 2010 through 2019, and as Chair of RESOLVE’s Advocacy Day on Capitol Hill in 2008, 2009, 2011, 2012, and 2013, and chaired RESOLVE’s Congressional Briefing in 2010. She was the recipient of RESOLVE’s Hope Award for Advocacy in 2010 and was the recipient of the Barbara Eck Founder’s Award in 2019. Also in 2019, the RESOLVE Advocacy Legacy Award in honor of Risa A Levine was established. Ms. Levine has appeared in numerous television and print features, including Fox and Friends, CNN, ABC and CBS, and Self Magazine, the New York Times, the Albany Times Union and other forums.

Back to Upcoming Events